Finding the Right Mobile Data solution for your RV

One of the biggest changes that the RV world has recently seen has come as a result of access to mobile data via cellphones and computers. This helps us stay in touch with friends and family, and gives us access to infinite amounts of information while we are on the road. You can enhance your road trip and in some cases even make it safer and cheaper (check out our recommended smart phone apps for RVers), but first you will have to make sure that you have a good internet & data solution in place.

4G stands for "Fourth Generation", and it has a few various incarnations that are competing to be the successor to the throne of mobile data. Currently leading the pack is the 4G LTE service primarily being pushed by Verizon, Sprint, AT&T and T-mobile among other carriers. LTE speeds can easily reach over 30 Mbps down and 15 Mbps up, rivaling that of land-based cable and DSL connections.

If you want to compare services for your RV, don't forget that in addition to the download speeds, the coverage areas should also be a big factor to consider. Click on the map below for a comprehensive map of the coverage areas for all of the major 4G network providers (also 2G and 3G). 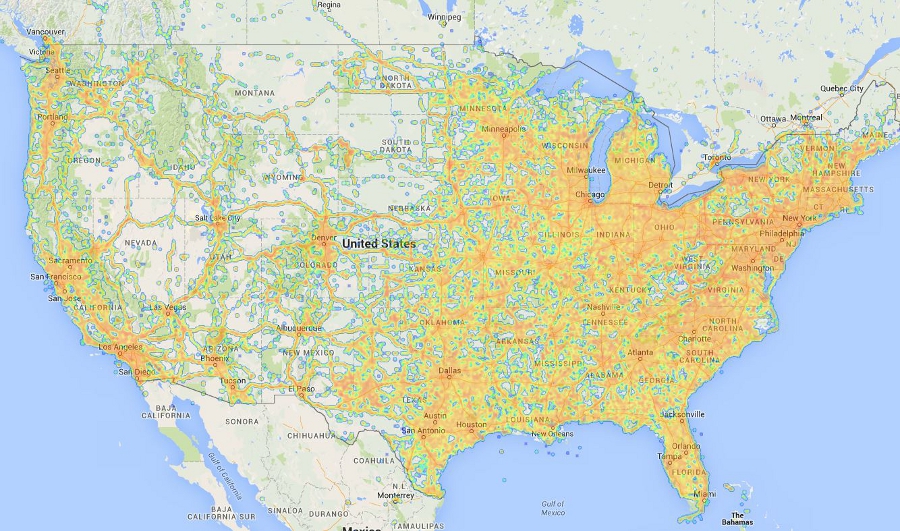 While 4G and 3G solutions incorporate satellites within their overall network, the primary source of their speed comes from nearby data towers. This is why you can encounter areas that don't have great service or any service at all. With true satellite Internet access, you can directly communicate with the electronics hovering in the sky above, but this immediacy comes at a premium. Between the equipment and the service subscription, satellite internet will cost more than the other options at their most basic level, but it is certainly competitive if you use a lot of data or venture into areas where cell coverage is questionable. The speed will vary based on location, but the basic plan from a prominent vendor, Hughesnet, claims 5 Mbps up and 15 Mbps down. Because you are directly sending signals back and forth from a satellite, there is an inherently greater latency than other services.

With satellite, you gain the advantage of having coverage virtually anywhere you go. However, poor weather can have an effect on the quality of your signal.

A Wi-Fi connection is a wireless network link that is limited to a local area. There are two types of devices that bear the Wi-Fi name. First, there are Wi-Fi routers and access points which can be connected to a standard Internet connection. You can use them yourself to share a satellite or other internet connection, but RV parks and other businesses frequently offer their Wi-Fi networks to nearby users as well. You can usually access these wireless networks for free. At the other end of the Wi-Fi world are the adapter that allow computers or other devices to connect to the service. Most smartphones come with included Wi-Fi capabilities, but research your model to be certain.

Wi-Fi networks can bring occassional security risks, however this will not be a frequent concern for those of you who like to use the Wi-Fi while you are parked outside of a Starbucks. It is typically hotels and airports where wireless network use can be a concern. If you are visiting Las Vegas during the Defcon Conference, you probably shouldn't even turn your mobile devices on:)

You can use Wi-Fi to your advantage if you have multiple people try to use the internet at one time in your RV. This advantage will be noticed simply because everyone can be "using" the same data plan and overall you may wind up paying less for mobile data usage if you buy the right data plan. You can consider setting up a mobile hotspot with one of your phones - this creates a Wi-Fi network using a 4G phone as the main point of access to the internet.

Like Wi-Fi, Bluetooth is a networking technology that helps facilitate Internet connections rather than inherently provide one. It allows devices to connect with one another within close proximity, which could be anywhere from a few inches to a few feet. You shouldn't rely on Bluetooth for your primary data network due to the higher complexity of sharing an internet connection over the technology, but it can help make connecting certain devices easier if you look for a Wi-Fi router with Bluetooth functionality. Keep in mind, bluetooth connections can also present a security risk because they are vulnerable to hacking. The signal strength in generally weaker than a Wi-Fi network, so this still only presents a risk if used in a busy public area where your Blutooth signal can be picked up by nearby hackers.

And that's all! Now you can filter through the morass of technology options available to you with a bit more knowledge. We hope you will find the right solution to make your RV adventuring more enjoyable, even if it's just by giving the kids a connection to the outside world to keep them calm during long stretches of road.