Pensacola Naval Air Station is host to the National Naval Aviation Museum, the world’s biggest naval flight museum. The museum’s displays ably demonstrate that that since the World Wars, the modern Navy’s place is as much in the air as on and under the sea.

Don’t think that all you’ll do is see a bunch of airplanes in and outside a big building, although you will see plenty—historically important propeller-driven and jet aircraft. Many are restored versions of planes that served combat roles in WWII, Korea and Vietnam. Carrier planes, land-based planes, seaplanes—they’re all represented. 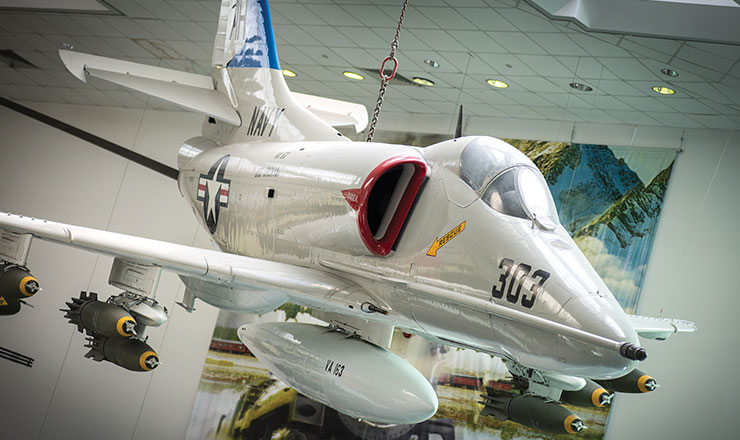 If you get there early enough you may catch the Blue Angels aerobatics team in flight during one of the pilots’ practice runs.

Want to take your turn flying a Naval jet? An ultra-realistic flight simulator lets you experience flight without leaving your seat.

Have you ever seen Marine One—the president’s helicopter? One of the former presidential flying taxis is on display. So is a restored version of the World War II fighter plane flown by former President George H.W. Bush, who had been the youngest commissioned combat pilot in the war.

The naval air museum is a day’s drive from Cypress Trail RV Resort. NOTE: Access to visitors who do not have a Department of Defense ID card is through the Naval Air Station Pensacola West Gate off Blue Angel Parkway (1878 S Blue Angel Pkwy).

Here’s where Blue Angels pilots perfect their precision air shows. These days, the Angels are flying F/A-18 Hornets in a four-jet diamond formation and with two solo pilots. You must arrive before 9:30 a.m. to have any hope of seeing a practice run. And the museum warns that practice runs may be canceled at any time. There is no charge to see the flights.

If you don’t see the Blue Angels fly live, see them in the Blue Angels 4D Experience. Special effects are built into the theater, not just shown onscreen, and synchronized to give audience members an immersive experience. You’ll feel like you’re flying in formation—not bad for $7.

Ever wonder what it feels like to do a barrel roll in a fighter jet? To climb almost straight up? To perform high-speed maneuvers? You’ll find out on a museum flight simulator. This high-tech marvel simulates combat flight with six directions of movement, high-definition imagery and surround sound. Your video games can’t begin to rise to this level of entertainment and involvement. (Fee: $20)

No, the USS Gerald Ford’s flight deck will not fit in the museum. But there’s a huge scale model of the carrier—and models of many others—that help you appreciate life aboard these floating cities.

Naval Aircraft of All Eras 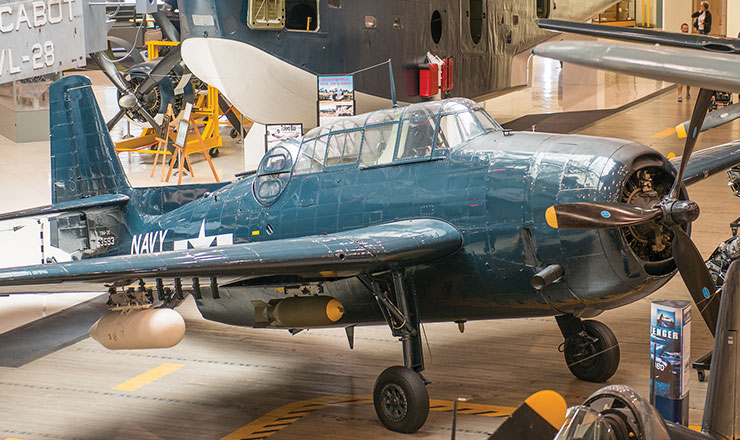 Among the aircraft displayed:

National Naval Aviation Museum
1878 S Blue Angel Pkwy
NAS Pensacola, FL 32508
Admission: Free (charges for some individual attractions $7-$20).
NOTE: Arrive early! Once the visitor parking lot by this entrance is full—often by 9:30 a.m.—no more general public (people without Department of Defense ID or who are not accompanying a person with an ID) is admitted for the day.

More in this category: « West Coast Florida Brewery Tour A Trip to Quiltfest 2018 Would Be Sew Nice »
back to top
© Copyright 2020. Cypress Trail RV Resort | Developed by Emcc Web Design