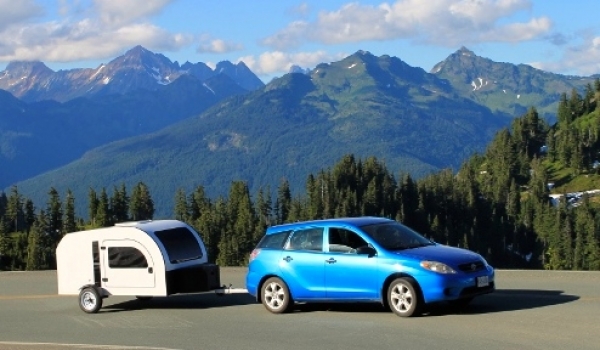 With the growth in popularity of smaller travel trailers, especially among younger, active campers, there’s often no need for many RVers to have a full-size tow vehicle.

The people who say “any car out there can pull one of them” may not be quite accurate. The days of Crown Vics and Impalas with full body-on-frame construction are long gone. Those cars could pull up to about 2,000 pounds without breathing hard. But there are quite a few cars, trucks, crossovers and SUVs built the past five or so years that can tow light- and even medium-weight trailers.

What To Look For

Before you buy any tow vehicle, especially a used one, know its capabilities.

You can find information on any model pretty quickly by consulting edmunds.com. Search edmunds year make model features specs. The Edmunds specifications page includes such useful information as exterior and interior dimensions, including passenger and cargo space—with seats up and down in hatchbacks, crossovers and SUVs.

Edmunds also lists maximum towing capacity and payload, which is just as important when considering a tow vehicle. Don’t forget that you’re towing a loaded trailer, not an empty one, so look for appropriate towing capacities. Warning: Towing with a vehicle that’s not recommended for that use may void your warranty.

Before buying anything, also look up the owner’s manual for the year and model, then read the towing entry.

Insisting on a CarFax report is helpful, since CarFax includes service histories. CarFax isn’t infallible, but it’s a good guide.

Edmunds includes actual owner reviews, some of which are helpful and some of which are merely “I love the color of the blue paint.” Discard the worthless reviews and look or patterns. If 10 owners report transmission or engine failures, that’s a pretty good indication that you may want to consider a different model.

Look up the number of complaints about any make and model. The site includes complaints made directly to the site and those made to the National Highway Traffic Safety Administration. It also has recall information.

Complaints made directly to carcomplaints.com include the engine and transmission type where options are available, while NHTSA complaints do not. (Sometimes it becomes obvious in the paragraph describing the problem.) You can compare complaints of any model by year. The site recommends the best and worst years for each model.

If you really do want a full-size pickup, all U.S. models—RAM, Ford F-150 and Chevrolet Silverado and its GMC twin, the Sierra—have 6-cylinder engines that are as powerful as the V8s of less than a decade ago. They are rated to tow up to 6,000 or 7,000 pounds, even without a turbocharger. All have diesel variants, but you really won’t need them for a light trailer.

There are also midsize pickups that can tow light trailers: Ford Ranger, Chevrolet Colorado, GMC Canyon, Toyota Tacoma and Nissan Frontier. All have 4- and 6-cylinder options. Like the bigger trucks, they have body-on-frame construction that can handle the stress of towing. Some have diesel options—again, unnecessary.

Midsize and bigger SUVs can tow quite a bit, but like pickups, they’re pricey. Tow package-equipped V8 Dodge Durango/Jeep Grand Cherokee twins can tow up to 7,400 pounds; V6 models can handle 6,200. In that range are the Ford Explorer and Chevrolet Tahoe.

Small SUVs and crossovers are a good option, many with V6 engines available, or strong turbocharged 4-cylinders. Cars.com lists 10 compact crossover/SUVs that are rated to tow 2,000 pounds or more, with the Jeep Cherokee topping the list. The Cherokee—the smaller model, not the bigger Grand Cherokee—can tow up to 4,500 pounds when equipped with the V6 and tow package. With a turbo four and tow package, it can handle 2 tons. Even the base 4-cylinder can tow 2,000 pounds.

Minivans and some sedans can tow light trailers. With front-wheel-drive, it’s best to stay with trailers 2,000 pounds or lighter. Check out the U.S. News ratings.